About » History of the School

History of the School

History of the School
Founded in 1910, San Ramon Valley High School (SRVHS) is located in the town of Danville, a Contra Costa County community approximately thirty-five miles east of San Francisco. By the 1950s and 1960s, Danville and the other agricultural communities of the San Ramon Valley began to experience extensive suburban development. In 1960, the population for the entire valley stood at 12,700; however, after significant growth, the current population of Danville alone is 43,574. SRVHS serves the upper-middle-class, suburban communities of Alamo, Danville, and San Ramon. Having earned the honor of being a California Distinguished School (1988, 1996, 2001, and 2009) and a National Blue Ribbon School (2002), San Ramon Valley High School has been, and continues to be, a source of pride for the community.
In order to help support students achieve our Expected Schoolwide Learning Results, parent support groups donate thousands of hours of time and raise over $300,000 annually to support school programs. Notable among these groups are the PTSA, the Wolf Foundation, Academic Boosters, the Fine Arts Association, Athletic Boosters, and the Wolftones. Community groups, including the Kiwanis Club, Rotary, Business Roundtable, and Soroptimists provide the school with services, awards, and scholarships. Through the efforts of parents and community members, SRVHS became one of the first schools in the state to provide a substance-free Graduation Night. The continuous support of parent and community groups helps San Ramon Valley High maintain its tradition of educational excellence. In turn, students give back to the community by providing volunteer services through a variety of
programs. 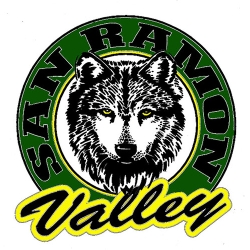